I thought we had passed the challenge of sleep training a few years ago since our baby is 5, but turns out I was wrong.  Although all our girls have their own rooms, our youngest daughter does not like sleeping alone, and we have always been firm about not letting children sleep in our room.  In fact, my husband wasn’t even thrilled with the girls sleeping in our room when they were infants.  So, the youngest girl, who is now 5, was sleeping on a mattress on the floor in one of her sister’s room, but developed the habit over the last few months of climbing into her sister’s bed at night.  Big sis didn’t like it.  She was okay with little sis sleeping on a matress, but not in her bed.
So, we have to sleep train all over again.  We have to train a 5 year old to sleep in her own bed—all night.  I made a chart and told her she would get a prize when the chart was filled.  She had to sleep in her own bed.  Unfortunately, for four nights in a row she woke up crying in the middle of the night, and had a very hard time falling back asleep.
Since she is 5 and very verbal, we had a long talk about it in the morning, and asked her what to do.  She said she will be brave enough soon to sleep all night, but “not tonight.”  Ah!!  I don’t do well without enough sleep, nor does she.
We talked about it again before bedtime that night, and told her she had to sleep all night, but maybe she wants something to cuddle with.  She said she really wanted a human to cuddle with (no joke, she said it).  We offered a stuffed animal to cuddle with.  She said she needed all the stuffed animals.  You can imagine that a house with three girls (four really when you include me) has a lot of stuffed animals.  Here is a picture of her bed.  She slept all night last night with all those stuffed animals, and here’s to hoping it works again tonight. 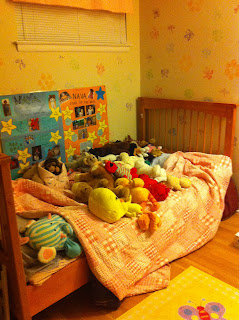 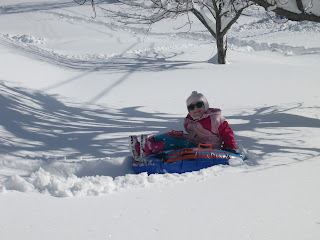 I love my kids, but I get so stressed out at random days off for them (ie, sick days, snow days, early dismissals).  I wish I could take this more in stride, but we live with such a tightly wound schedule that neither the girls nor I do well without our regular structure. Not to mention, that I work, and find it very difficult to get much work done with the girls at home.  I feel like I end up being a nearly full time chef and maid on those days and can’t manage to fulfill my other responsibilities.

I find that when we have a scheduled week or so off, we do very well.  I always plan one outing out of the house, even if it just a trip to the grocery store or library, and I don't have the expectation that I will be able to work.  I enjoy the time with girl, and being able to be a bit more laid back.  That is what my “vacation” days are for!

Now that more snow is expected tonight, I'm preparing myself for another disruption in schedule, but I'm not sure where I will find the time to make up the work. I don't think staying up in the wee hours of the night is the best solution because it only makes handling the day off harder when I'm exhausted.

How do you balance this?  Advice please…
Posted by Aviva at 8:56 AM 5 comments:

I have been contemplating for a while writing a blog, and the recent article by Amy Chua on the "Chinese Style of Parenting" was the perfect impetus for me to start. While I strongly disagree with her so called "Chinese style of parenting," I do think it is very interesting food for thought in terms of what are our responsiblities as parents.  How do we raise children that will turn out to be well adjusted, contributing members of society?  I think that is the minimum bar we set for how we want our children to be as adults.

I found myself really analyzing my parenting as a result of this article, and it particularly struck me yesterday while I was helping my older daughter, who is in 5th grade, study for a big test. I know I am tough on her when it comes to studying. I believe that you need to study until you can get all the information correct (when you have a review sheet) in advance of the test. Also, you need to start studying as soon as you know you will have a test. Don’t leave it to the day before the test. Then, however you do on the test is the best you can do. I wouldn’t let her stop studying and watch t.v. when she was able to answer most, but not all, of the questions correctly. She had been studying for about 1/2 hour at that point, not hours. Earlier in the week I made her re-write a paragraph for a school assignment because I did not think she put enough thought and effort into it as she is capable of doing.
I struggle with whether that make me not nurturing enough, and too tough.

I came to the conclusion that it is my responsibility as a parent to teach my kids to work as hard as they can because that is a very important life skill, but then be nurturing and comforting with however they do in school. Chu wrote that Chinese parents always take the side of the teacher or coach, and that is certainly not my approach. I consider myself my children’s advocate, and have certainly spoken to teachers when I thought the teacher was off base.

However, while the two older girls were doing school work yesterday, I put on music and danced with the youngest, who is in 4 year old nursery school. This is not something that happens very often after school. Without have put any thought into this, the priority of my time after school is helping/overseeing homework, and keeping the youngest one occupied so she doesn’t disturb the older girls doing homework. I suppose the thought I did put into it, is making sure that I am home after school, as many working parents are not home until several hours after school is over. We had a great time dancing which also got me to think about whether the priority of homework over playing with me is the right priority. I realize that ideally both would occur simultaneously, but I just can’t do that, though I wish I could. I do set her up with some kind of activity or play date with a neighbor, but yesterday was unusual that I gave her one on one attention for a significant period of time after school. Part of that is the reality of three kids who have different needs, but I struggle with whether my priorities correct.

I’m sure this is an on-going challenge. Especially, because each kid has such different needs and those needs change as the kids get older. I do believe that thinking about it and discussing it ultimately does make us stronger parents.
Posted by Aviva at 10:18 AM 2 comments: